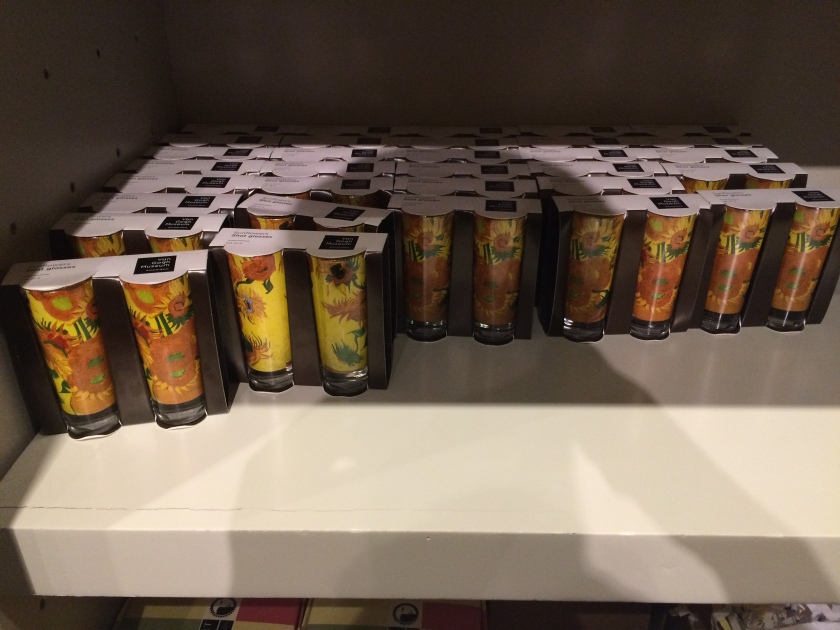 So we got a glimpse of Chicago’s darker side 3 days after our first arrival, but let me talk about more “light” things first. Going to art museums here in the U.S. has turned out to be quite a challenge for me. The amount of important works of art is hard to digest when you only have a couple of hours to explore. I found my visit to the MoMA in New York similarly exciting, interesting and at the same time tiring as last week’s trip to the Art Institute of Chicago. While some people try to grasp everything by taking a lot of photos, for me, doing that would have an almost blasphemous character (maybe I just read Walter Benjamin’s essay “The work of art in the age of its mechanical reproduction” too many times). I found that looking at (great) art can have not only a mental or emotional effect on the person looking at the piece of art, but that this effect (or what Walter Benjamin would probably call ‘aura’) can actually also become quite physical. For me, this physical effect is triggered best by art from Monet. As soon as I am really focused on one of his original works, I can literally feel my breathing and heart beat slowing down and my muscles loosen up tension. This never happens with a photo, no matter what kind of motif it shows.

With this kind of aversion against art photography and replicas in general, you can imagine my horror when we came out of the exhibition of Van Gogh’s bedrooms and found a souvenir shop at the exit. Another term from Critical Theory is still ringing in my mind. We take great art and make Kitsch out of it by printing it on every-day-objects. Why? Because it looks nice and we want to own it? Or maybe it is an attempt to fight the impossibility of seeing it all (like in the German “begreifen” -> to understand, see and grasp everything) by actually making art graspable in a literal sense? Well, as we say in German “Jedem das Seine” – everybody according to his own will.

After seeing the souvenir store, all I wanted was to go back home. We had a traditional Chicago-style lunch – deep dish pizza, and then rested a little bit to get ready for another little marathon in the evening. 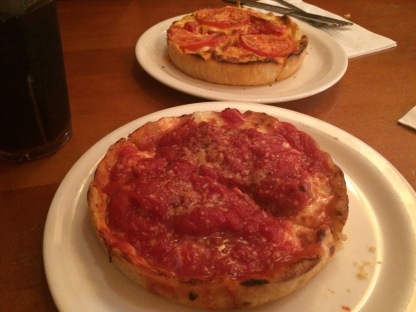 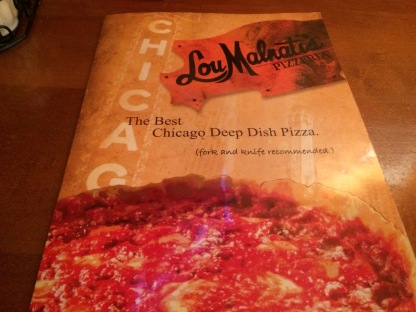 This is the part in which I am the bystander and my significant other should actually comment on this mutual experience of ours. He actually did so in a way more professional way than I can do here, so for those of you who are familiar with Spanish, please check out his review 2666 goes to Hollywood. I have not even finished the first chapter of Roberto Bolagno’s novel 2666, yet, and was looking forward to understand better what my significant other is writing his dissertation on. 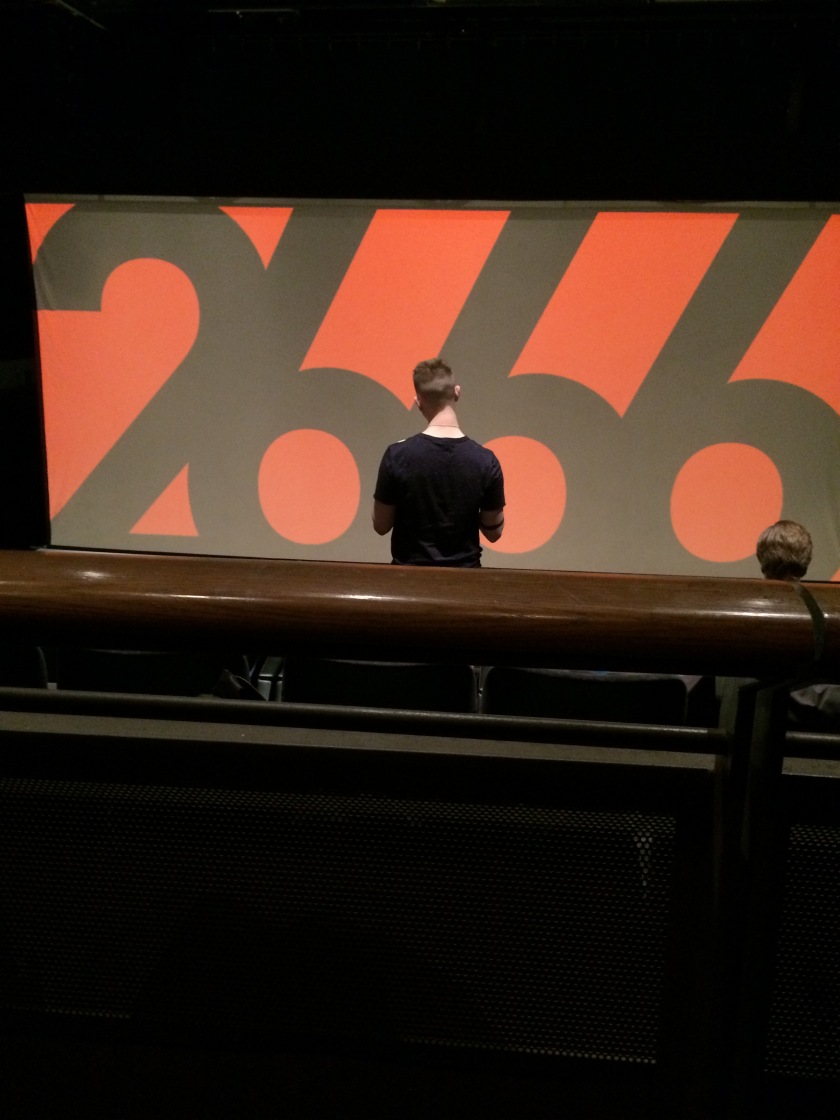 In the end – after 5 1/2 long hours, I came out of Goodman Theater wondering if a theater adaptation that obviously really tries to do justice to the novel it is based on can work, because for me, it unfortunately did not (remember that I (re-)view it as a theater play on its own, since I am not very familiar with the novel). It was most of all the tone, that went back and forth from slapstick to extreme seriousness, that made the play as a whole hard to digest. Just one example here is Hans’s sister Lotta and her overly faithful and joyful appearance, throwing in funny comments about Hans’s obsession with sea weed contrasted by female characters reading the names of the murdered women or the direct references to the Holocaust in the last act. The slapstick reached its peak when the actors over-pronounced the name “Bubis”, which, in German, is a perfectly normal family name, but in English, of course, bears a strong resemblance to the word boobies. After a 5 hour marathon, the audience seemed ready to grasp this last straw of entertainment and laugh empty-heartedly at this rather banal German-English word confusion. I am not going into detail about the German and Romanian fake-accents the actors put on, while at the same time mispronouncing popular German authors’ names, because I think the last example is already demonstrating what kind of intellectual level we had to deal with, here.

As much as some people seemed to have liked it, I still wonder, what the play was supposed to do, be and most of all – for whom? It would have been possible to just take the first chapter and parts of the second chapter of the novel and make a neat, 2-hour slapstick comedy out of it. As a German, I might be biased, but I just found the over-simplified representation of WWII and the Holocaust disturbing, especially when mixed up with overly stereotypical character-representations and slap-stick humor. But again, this might be due to the fact that I am German and as such, generally lack a good sense of humor and, as a Germanist, be all to fond of the authors whose names were mispronounced so many times during this evening… Who knows.

On our way back to the apartment – again, we were walking and it was passed midnight – we passed another little spot that, as we would soon find out, has its own dark past. 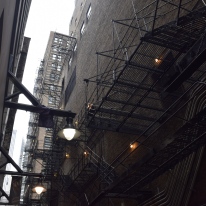 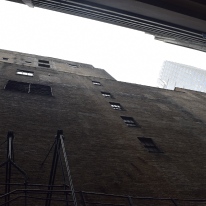 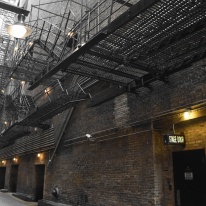 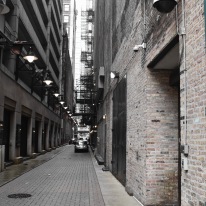 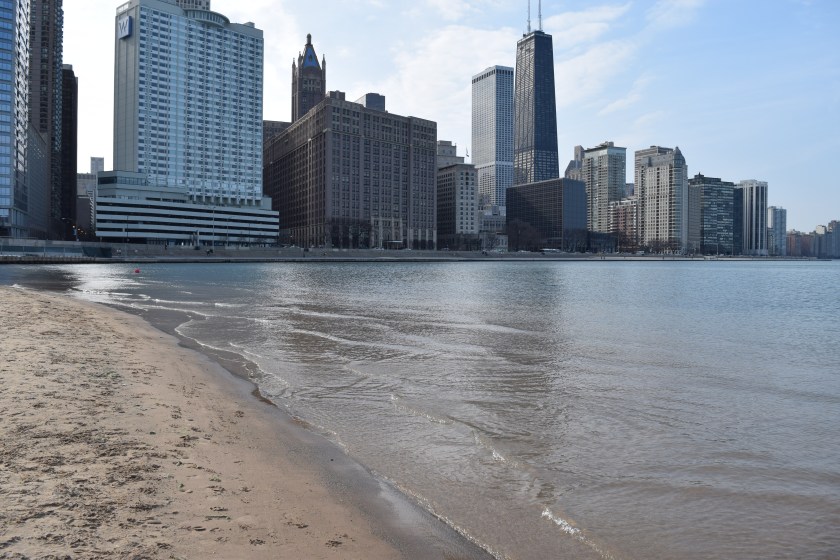 Going back to Chicago always feels a little bit like coming home. With a big part of my extended family being rooted here, the streets feel familiar and hold good memories of my former visits. Despite my general lack of sense of orientation, I have a vague sense for the different neighborhoods. For our Mini-Springbreak-Vacation, we booked an Airbnb in Downtown, close to the Hancock Center and Navy Pier, which allowed us to do most of the sightseeing by foot.

As it turned out, we were very lucky in regard to both weather and accomodation, the latter guaranteeing that there was also enough time to relax after the intense walking sightseeing inflicted on us and also generally recharge our mental batteries for the upcoming grand finale of the spring semester. 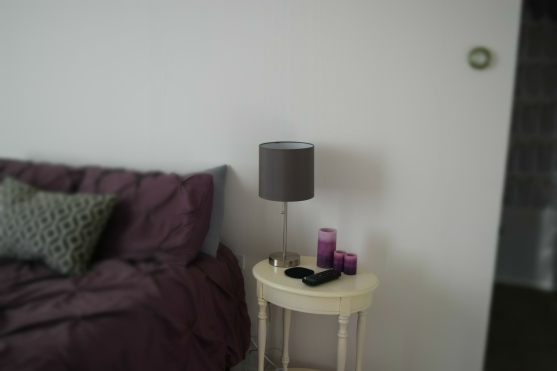 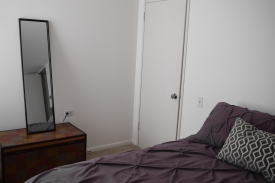 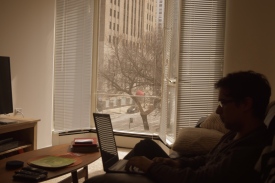 After a 10-hour train ride from Pittsburgh, taking it easy was of course also more than necessary and the really nice thing about having our own little space is that we could take all the time to do so.

One rule I have when exploring new cities is that I try to avoid doing to many touristy things in a short amount of time, so we settled for doing only one major thing on our first full day in Chicago and went to close-by Navy Pier. On our way, we got a first glance on the foot of the Hancock Building and the famous haunted Water Tower (more on that later) and also realized/had a flashback (me) that the most atmospheric and beautiful boardwalks indeed can be ruined if the most busy street of the city happens to be right next to them. 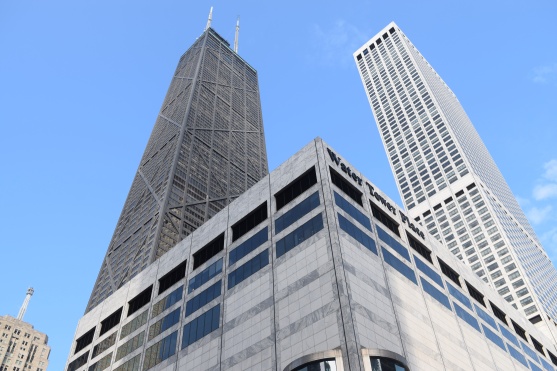 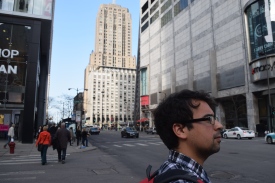 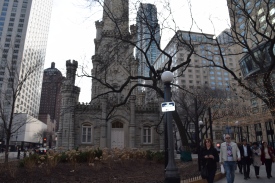 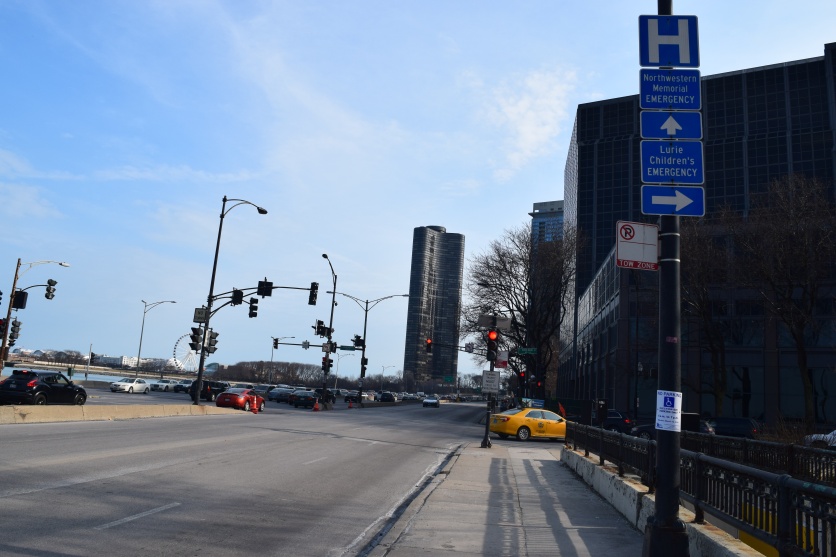 In the end, all the walking and inhaled emissions were compensated by the calm contemplative atmosphere Navy Pier provided for us on this rather calm Monday afternoon in early March. 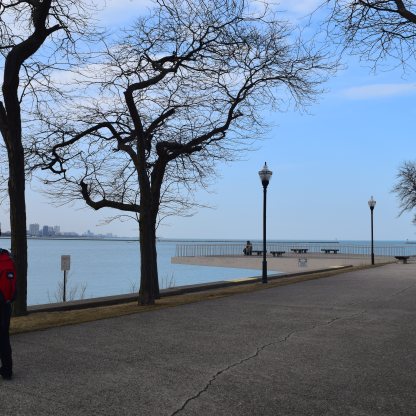 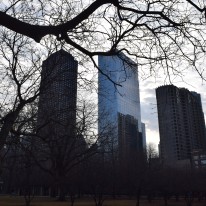 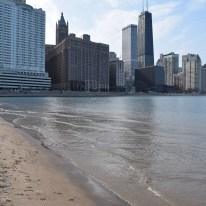 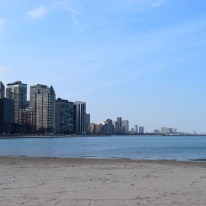 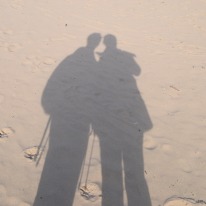 Once inside, I found that nothing had changed since I have last been here (in 2014?). Since most of the rides and smaller food booths were closed, most people – just like us – used the warm weather for a walk along the Pier, stopping here and there to take a snapshot and enjoy some of the art work inside the building. 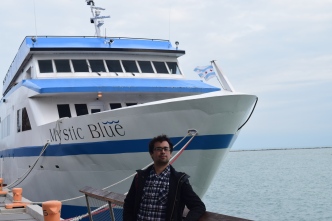 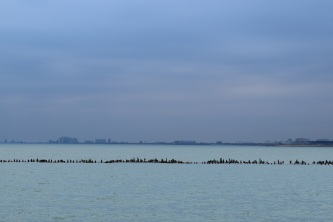 As we got hungry and started looking for a place to eat, it took us some time to find something within our price range (we are poor grad students, after all) but we finally ended up in Bubba Gump Shrimp Co. While we were waiting for our (sea-)food, I was once again reminded how obsessed Americans can get with details and that a food chain celebrating a successful 90’s film or a luxury version of the most iconic American food chain are not really considered something very unusual here (I also remembered a visit to an even fancier Mc Donald’s initiated by Bill Ruby). 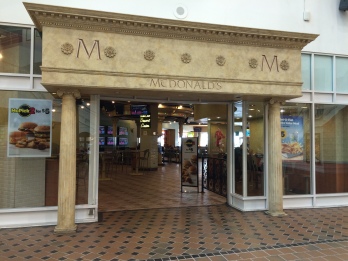 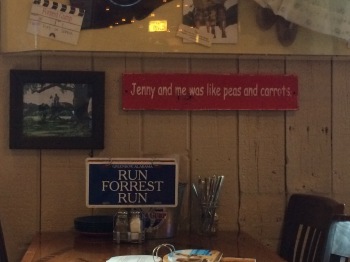 On our way back to the apartment, we decided to give the Signature Room a shot before going home and calling it a day. Up on the last floor of the Hancock Center, Cocktails in hand, the atmosphere was just right and we could almost hear Gotham City calling for Batman. Unaware of the horrors, that are said to haunt this building, we enjoyed our drinks and then went back to our apartment… 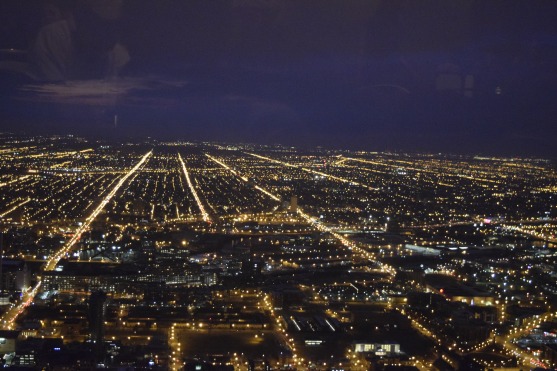 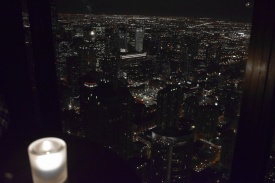 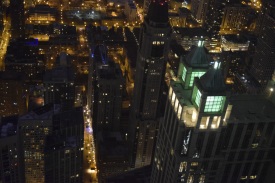 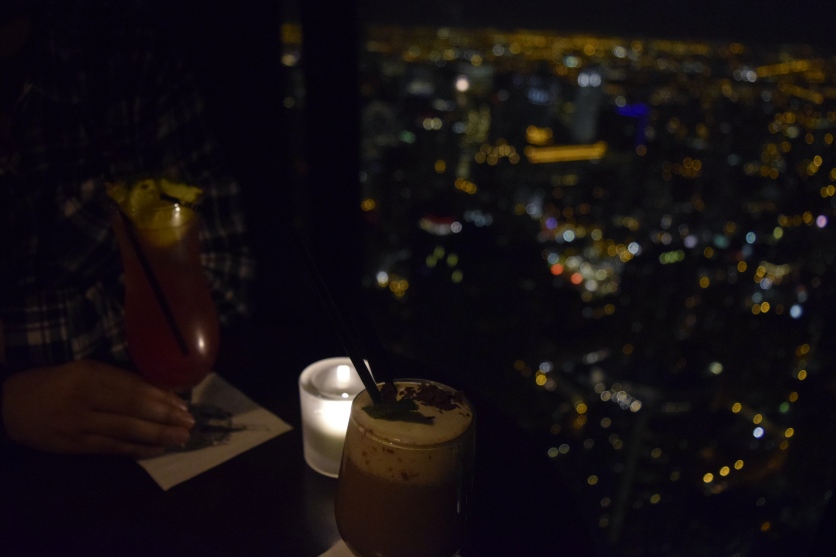